Does Your Marketing Department Need to Jump Ship? 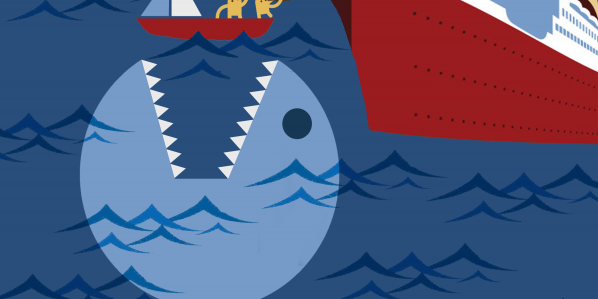 Even if your campaign, technology, or overall approach has given you a good ride, it may be time to try something new.

Let’s say you’ve successfully been using a specific piece of software to enhance your customer feedback . . . or you’ve been running a campaign for the past year that has had fantastic payoffs in customer response . . . or your department has been ticking along using the same processes for the past decade. Think of each of those things as a “ship” that’s done a good job so far carrying you down the stream. And why mess with what’s working, right?

But look ahead. It could be that the stream you’re navigating is about to merge with a larger river—and the water’s going to get rough. There’s a big boat up ahead, though, that’s far more capable of navigating the rolling water. In fact, it will even take advantage of the fast-moving current to reach its destination sooner. Doesn’t it make sense to climb out of the small craft you’ve been in and get on board that larger boat?

It’s not an easy decision. You probably feel attached to that little boat. It feels comfortable. The larger boat up ahead is a big unknown. But does it really make sense to try to paddle out into a raging river in a rowboat, when you could climb on board the larger ship?

And then, let’s say you ride that big ship all the way to the ocean—and now you’re trying to navigate a shark-infested sea when you see an ocean liner. The smart move would be to jump ship again. Go with what works best for the situation where you find yourself.

At MSIGHTS, every time we finish a two-week sprint and start another one, it’s like jumping ship. We have to be able to let go of what worked last time—and find what works this time. Sure, we have our long-range course charted out, but each time we change boats, we know we’ll have to adjust the map. And then there’s IT; these days technology is woven into everything marketing does—and by its very nature, technology is constantly changing. So you’d better not get too attached to any particular technological “ship.”

Where are you, the marketing director, in this analogy? You’re the captain, the one who has to make the decision to switch ships. No one expects that every time you climb aboard a larger vessel you’ll head down to the engine room and start tinkering with whatever propels the ship. You don’t have to get your degree in marine engineering—you just have to know enough about what’s happening to set your overall course.

Even that can be intimidating, though. As you move from ship to ship, everything becomes that much more complex. If you were really good at paddling a rowboat, it can be tempting to just keep on paddling, instead of taking on the risk and responsibility of captaining a far larger craft. It seems safer. You may even feel as though you’ll look less foolish (seeing as how you’re a paddling expert), even if you’re out in a rowboat in the middle of a storm at sea, than you would if you were trying to captain an ocean liner. But really, that little boat just can’t survive out there in the ocean. You need to jump ship.

And you need to get used to jumping ship fast. If you don’t, larger, more complex boats will pass you by as the water keeps moving faster and faster. So take a look at your department. How long have you been doing the same thing, sailing the same “ship”? Are you still keeping up with that fast-paced current out there?

Is it time to jump ship?